Hey Cav med guy...where ya been? If you haven't been visiting this site often you may have missed some of the articles. Not to worry - gotcha covered. Visit our
Old Front Page News and you'll be able to catch up with past articles. 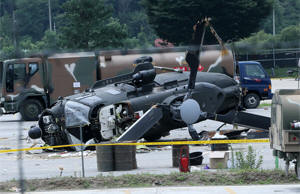 Five crewmembers were injured after an Army ambulance helicopter crash-landed at a military base Monday.

The helicopter made an emergency landing on the airstrip at an Army aviation battalion in Pocheon, 46 kilometers north of Seoul, at 10:35 a.m. while on its way to pick up a patient there, according to the Army and the local fire department.

Five crewmembers were injured, two seriously, and were moved to a nearby hospital. None of them are in a life-threatening condition, they said. The tail of the medevac chopper was partially destroyed.

"We have suspended the operations of the same type of the aircraft as of 11:10 a.m. Medical evacuation missions will be carried out by UH-60 jets," the Army said in a statement, adding they will look into the exact cause of the accident. 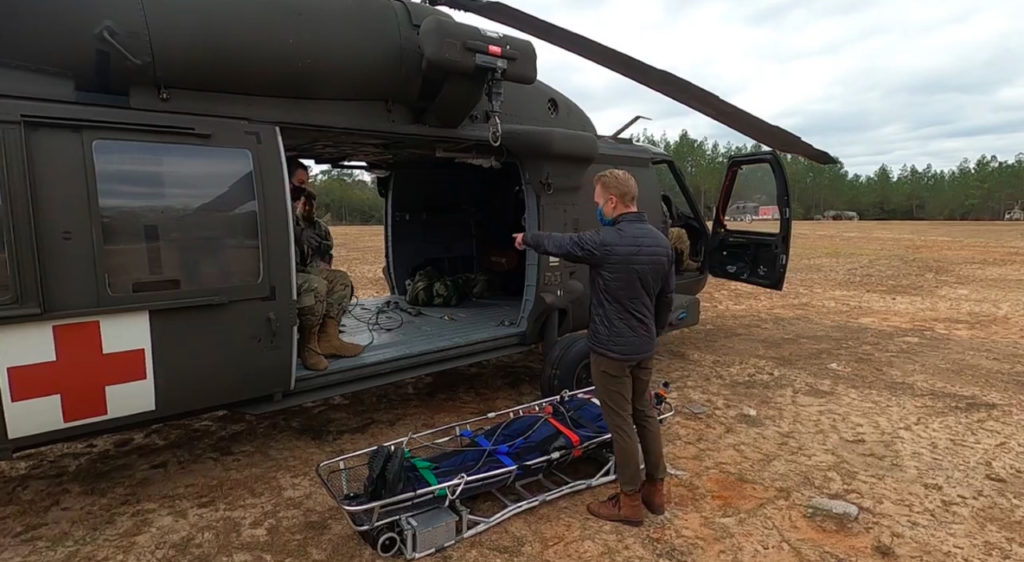 Just as important, the successful field tests were the culmination of months of Electromagnetic Interference and Aircraft Compatibility Testing in anechoic chambers, which ultimately concluded that Vita’s LSS Litter Attachment does not interfere with aircraft electronics systems, clearing the way for the LSS-LA to be test flown under Black Hawk HH-60M and UH-60L aircraft.

The LSS-LA performed as designed in hoist insertion and extraction exercises, controlling unpredictable motion without taglines and mitigating as much risk as possible. The system successfully provided crews the ability to remotely orient or rotate the litter, as well as eliminate swing and spin with the touch of a button.

The $740 billion defense funding bill was signed on New Year's Day with bipartisan support. $5.5 million of that funding has been authorized and appropriated for the Army to purchase litter stabilization systems. In accompanying report language, Congress recognized that litter stabilization technology has the potential to offer vast improvements to various military operations across all branches of service.

The latest article about the 15th Medical Battalion in Vietnam is now available on this Web site under Informational/Historical Documents/Saber Articles. Mike Bodnar faithfully pens this article each month for the 1st Cavalry Division's Saber newspaper. We have back articles all the way back to 1999. So if you're stuck indoors for a while, why not browse through the old articles - it's interesting reading.

A UH-60L Black Hawk helicopter aircrew with the Alaska Army National Guard’s 1st Battalion, 207th Aviation Regiment, rescued four individuals and a dog after they became stuck in a boat on the Kuskokwim River near Bethel, AK. 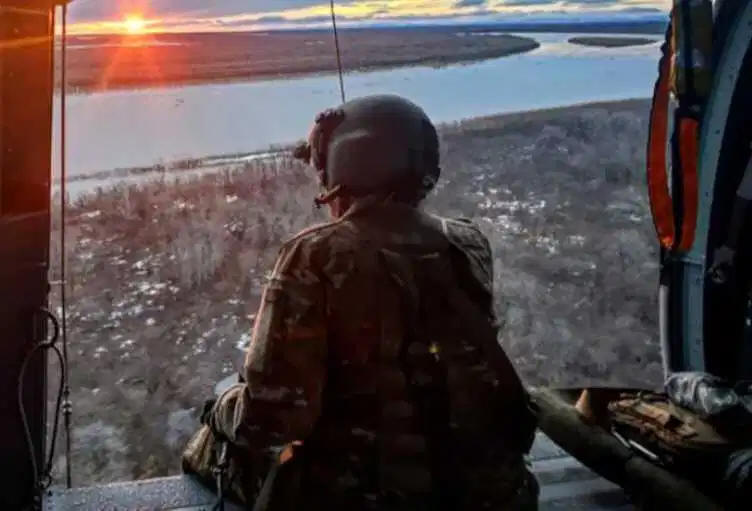 “The individuals were stuck on the river between Bethel and Kwethluk because of break-up, There were areas of ice blocking them from going further.” Edwards explained the boaters had managed to get a call out asking for help, but that their phone had died at some point. Despite this, the Alaska State Troopers were able to provide the Rescue Coordination Center with an approximate grid coordinate.

After accepting the mission, the 207th AVN aircrew launched a hoist-capable UH-60L Black Hawk medevac helicopter from the Alaska Army National Guard aviation facility in Bethel. The Black Hawk was deployed to Bethel approximately two weeks ago, specifically to provide a rescue asset for the area during the 2021 spring flood season, and in this case, the waters were already becoming problematic.

“The medevac crew located the boaters but decided the waters were running too high and fast to hoist the medic directly down to the boat,” explained Edwards. “There was a lot of run off from the river, so they found a little strip of land that was near them and determined it was the best option to safely and quickly get the medic down to their location.” After the medic was lowered to the strip of nearby land—essentially a tiny island in the river—the medic then guided the boaters and their dog to his location and hoisted them up one by one. Once the individuals were hoisted into the helicopter, the medic assessed that they were in the early stages of hypothermia.

The medic began treating the individuals by giving them warm blankets and helped them rehydrate, After they were all safely aboard, the crew flew them back to the Bethel hangar. For this mission, the 207th AVN was awarded with four saves. 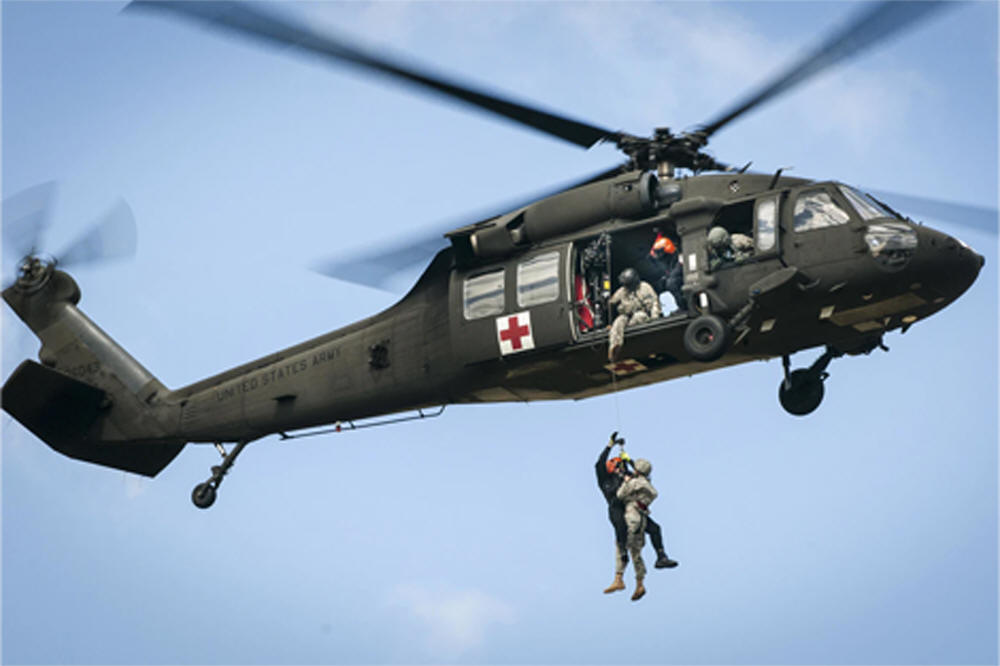 The branch exercised an option under a previously awarded contract to procure lot 45 HH-60M choppers for the fifth year of the aircraft procurement effort, the Department of Defense said Thursday. DOD noted that the estimated completion date for this work is July 31 next year.

HH-60M features an integrated MEDEVAC equipment package kit intended to support casualty evacuation missions at daytime or nighttime or even in extreme weather conditions, according to the service branch. It is a specialized multi-mission helicopter that can support medical, personnel or cargo transport missions. The aircraft is equipped with state-of-the-art medical systems to provide critical care for as many as six patients.

The UH-60M provides additional payload and range, advanced digital avionics, better handling qualities and situational awareness, active vibration control, improved survivability, and improved producibility. The UH-60M can fly as fast as 151 knots at altitudes to 15,180 feet to distances as far as 276 nautical miles between refuelings.

More lethal, semi-autonomous, slightly stealthy, and twice the speed and range of a Black Hawk helicopter are just a few of the terms used to describe the Army’s emerging Future Long-Range Assault Aircraft (FLRAA), a now-underway developmental effort slated to deploy by 2030. 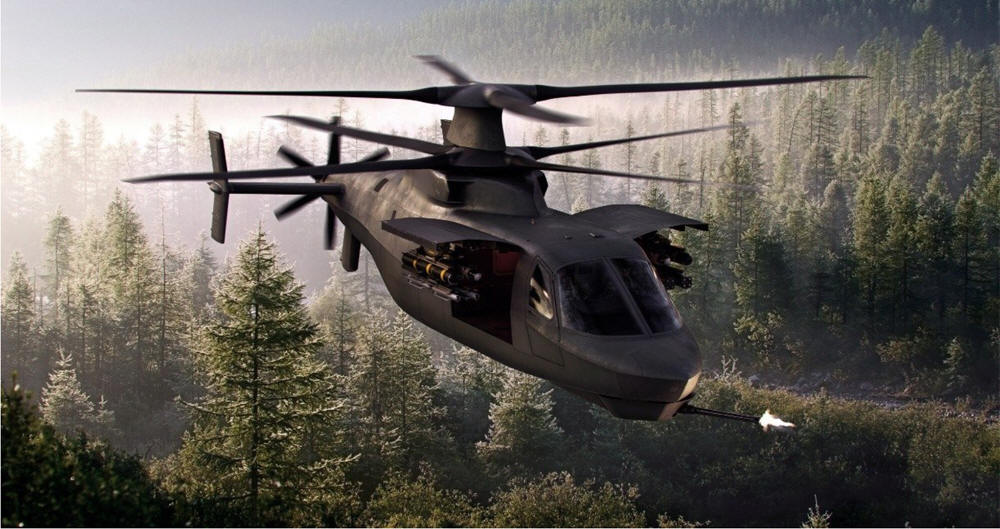 Calling it a future Black Hawk would both be correct and reductive, as the new aircraft will assume all of the utility helicopter missions such as infantry transport, MEDEVAC, cargo delivery, and some reconnaissance, the new FLRAA will likely take on an even broader mission scope given that it is being architected for warfare in the 2030s and beyond. Case in point, an Army report described the new aircraft as something which will “augment” and not necessarily “replace” the Black Hawk.

Two aircraft are now flying, one from Bell Helicopter building the V-280 Valor and another from a Lockheed-Sikorsky-Boeing team called the DEFIANT X. The V-280 is engineered to be a next-generation tiltrotor compound configuration and the other is built with counter-rotating coaxial rotor blades and a back-end thrust propeller to achieve massive new amounts of speed and in-flight stability.

A Black Hawk is reported to be able to hit speeds up to 150 miles per hour, therefore something twice as fast would be quite fast. While the exact speed of the DEFIANT X is not available, likely for security reasons, Bell reports its V-280 can hit speeds of 280 knots. The DEFIANT’s predecessor, called SB > 1 DEFIANT is reported by Sikorsky developers to have reached speeds greater than 230 knots, adding that innovators continue to push the envelope beyond that with the DEFIANT X. The DEFIANT X builds upon Sikorsky’s history of developing coaxial rotor blades to break new ground with helicopter speeds, as years ago its Raider helicopter set new records by flying 220 knots in 2008. Bell developers tell The National Interest that their V-280 has hit 305 knots.

Beautiful stippled limited edition print of the Bell UH-1H Huey, 1st Cavalry Division Medevac, Vietnam, measuring 16" x 20" and is printed on archival quality 80# coverstock. This is not a DUSTOFF - has M-60 mounted in the hell hole. It comes with its own certificate of authenticity signed and numbered by Thomas M. Maloney. (Read More)

A must-read for all association members

Two of our association members have proposed researching and defining the incident that happened in May of 1970. The two who have chosen this undertaking are Jim Mitchell and Patrick Martin. Both were involved in the events of that day and they would like to document what exactly transpired. Everyone involved has their own version and take on what happened and these two, Jim and Pat, want to accumulate enough information from others involved to make an accurate and timely determination of what, who, and in what order thinks occurred.

They are asking for anyone involved or that has some knowledge of that day to please get in contact with them. Jim’s email is jamesmitchell121@gmail.com and his telephone number is 574-339-9253. Pat’s email is medevac121@gmail.com. They are contacting everyone they know but there is still other information that will be vital to their success. Some have passed and others, like Jim himself, have not known about our association.

Let's all of us put our heads together and maybe we can name someone that flew there that day or know someone from other units that may be able to help. Excuse my English but “we ain’t getting any younger”.

Thanks for any input,
Jim Ferguson
President

I received a CD of pictures, thanks to Ken Archambault, from his time with 15th Med Bn back in the 67-68 timeframe. There are quite a few pictures of "young warriors" that are unlabeled on Photo page 6. I know I'm asking the nearly impossible, but if any of you old farts still have memory cells from only moderate drinking, I sure would appreciate an e-mail or text with a name for one (or more) of Ken's pictures. Oh, wait, if I'm asking for help from the 67-68 year group, you probably don't have a smartphone so texts are out of the question. God, I can't believe we still have folks alive that were around way, way back in 67!! Love ya guys.

We've got over two hundred names of soldiers that served with the 15th Medical Battalion but we have no way to contact them - no address and no e-mail address. We'd appreciate you taking the time to scan the Lost and Missing Members List and seeing if you know how to contact any of them. If you do find someone you are in contact with, please ask them to visit this site and fill out the Contact Us form or you complete the form for them.

The database making up the Unit Member Search has been scrubbed to make it as accurate as we can at this time. All e-mail addresses were checked for currency and "dead" e-mail addresses deleted. This leaves many members without an operating e-mail address associated with their data. I need your help in filling in the blanks. Please search for friends you served with and if you notice an individual's name doesn't have an e-mail address, but you known what the e-mail address is, then please e-mail me. Thanks.